Louise and I spent a week in Santorini during August 2013. By chance we timed it to coincide with the annual festival during which an impressive firework display is used to simulate an eruption of the  Nea Kameni volcano.

We watched the display at close quarters from the deck of a boat. It was one of the highlights of the trip. Another the Volcano Adventure tour we took that included both a guided walking tour up the Nea Kameni volcano with a very knowledgable and informative guide and a chance to swim in the thermal waters of Old Kameni.

As tourists on Santorini we couldn’t miss the Oia sunset. After a day in which we descended to the old port of Fira by cable car and returned to the town by donkey then travelled by public transport to Kamari for a lazy afternoon on the beach we went in the early evening (by local bus) to Oia and sat for nearly two hours watching the sunset, taking photographs and drinking sangria.

One of the hightlights for Louise was the Greek night of eating, drinking, dancing and plate smashing (although the audience didn’t get to join in with the plate smashing). To protect the innocent I haven’t posted any pictures in the slide show (actually they all came out a bit blurred!).

We stayed in the Krokos Villas hotel. It was extremely pleasant and friendly. The service was excellent particularly the room (or balcony) served breakfast. Breakfast on the patio Our villa at hotel Krokos, Imerovigli 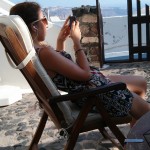 I needed to take a break from work but I would have been happy to laze around at home idling my time away. That seemed  the easy option. I felt too tired to bother with the effort of choosing and … Continue reading →

This site uses Akismet to reduce spam. Learn how your comment data is processed.

With a little help …

This Site Is Protected By
Shield →
x

This Site Is Protected By
Shield →